Visualisation is a powerful method for communication, especially in cross-disciplinary communication with various stakeholders, as in operations.

Visdom is an ITEA3 Project 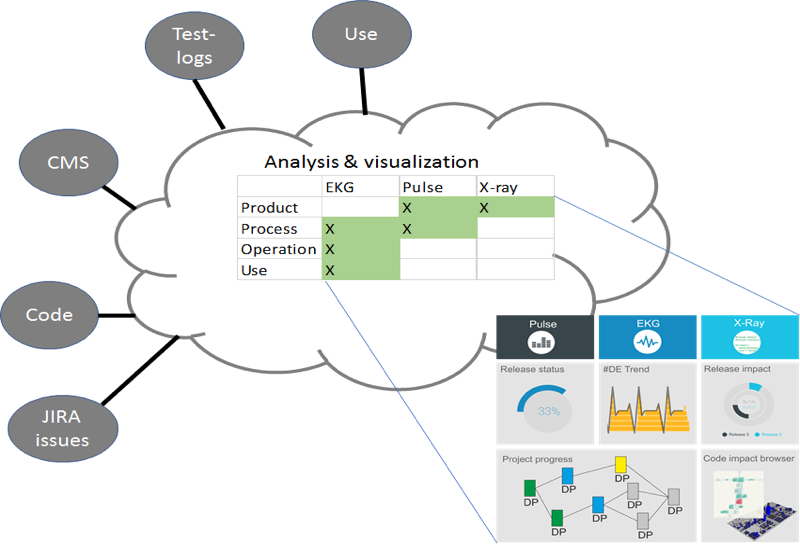 DevOps projects typically use number of tools and many of these tools include visualization components. One of the unique innovations of VISDOM project is to create new visualizations that utilize data from several tools.

For example EKG: Software projects typically include various repeating tasks and iterations, such as sprints or delivery cycles. Such phenomena can be shown as repeating visual patterns, similar to the rises and falls of an EKG curve. Problems will be quick and easy to spot as variations in the patterns and especially difference between planned and real state. Based on our earlier research we assume that under such conditions the status of a development organization can be efficiently monitored by following repeated graphical patterns. In the VISDOM project we plan to create both research prototypes and industry-relevant implementations of this concept.

The project creates a configurable dashboard concept that can have different content and views to different stakeholders. This concept has been visualized in below. We will also create prototype dashboards for the pilots, and the companies may exploit these dashboards by integrating them in their current and future development support tools. A dashboard is not necessarily just for direct presentation of data, but it can also include diagnostics tool and help the stakeholders to investigate possible problems in their projects.

Does it matter who pays back Technical Debt? An empirical study of self-fixed TD

Information and Software Technology (in press)